Slave to food or slave to viewer ratings? 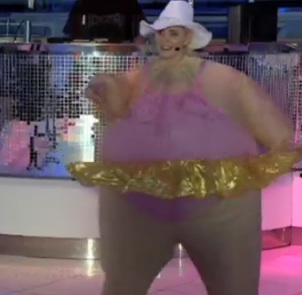 I don’t watch a lot of live television apart from films, cookery shows and classic British comedy and yesterday I was reminded of one of the reasons why I avoid it. I was pootling about in the kitchen and J was cruising with the remote when he called out to me that there was something I might be interested in. That something was called “Clare: Slave to Food” and it was about to air on Living TV. The trailer was showing a curvy, pretty blond woman eating a piece of cake while the voice over said in dramatic tones: “Join us as we follow former Steps star Claire Richards as she attempts to uncover the real reason why she has such an unhealthy attitude to food and the effect her yo-yo dieting is having on her body.” I settled down to watch it, very curious to see how they would deal with the subject, very Beyond Chocolate, right?
Wrong.
What followed was an hour of frankly depressing trash television. Claire was mostly shamed into making “changes” (I use inverted commas because I am skeptical of just how many changes she made and just how long lasting they will be) with the “help” of an extreme therapist (whatever that is) who looked like a former boy band star himself – sunglasses and all.
Over the next 60 minutes, he underlined just how unhealthy her diet was by going through her kitchen cupboards and eating dog food because, supposedly, it was the healthiest thing there. He then made her walk up to strangers in the road, pretending to recognise them in an attempt to boost her self esteem. The idea was that if she made herself ridiculous she’d feel better about not being perfect. After that, she was taken to a child obesity camp and made to play rugby with the inmates (my word) and then had to sit on a stage and give them a pep talk. She met up with girl band producer to be told that she would never be selected for a band at the size she was and finally, most cringe inducing of all, she was forced to sing and dance to an old Steps hit in a ridiculous weighted, ‘fat’ costume of the type they put on Total Wipeout contestants.
To be fair, Claire did seem to have some “ah-ha!” moments and reported feeling much better about herself at the end of the show. The again, wouldn’t she have to?
We have been approached several times over the last 10 years by producers who are keen to take Beyond Chocolate to the small screen. We have spent many hours talking with them about how to make our approach “exciting to the viewer” and what type of “visual reveal” would work at the end of each episode and none of these projects have ever come to anything. Can you guess why?
The sad truth is that Beyond Chocolate is based on compassion and kindness and small – very small – long lasting changes. There’s no shock factor in the way we support women to radically change their relationship with food. We don’t eat dog food, we don’t shame them in public (or in private!) and we don’t “push” them to make extreme changes.
So, Claire, if you ever want to truly taste the freedom, to know what it’s like to feel comfortable around food and in your body for good, to find a community of women who will support you with encouragement and respect, we will be here waiting.

Oh dear! Poor Claire! I too avoid those types of programmes – and there are quite a lot of them around. I hope the programme hasn’t done her any lasting damage and that she finds us soon.

These programmes are awful! We have just had a British programme start here in NZ called “Embarrassing Fat Bodies”. What a title. I am voting my remote and never watching it!
Meredith.