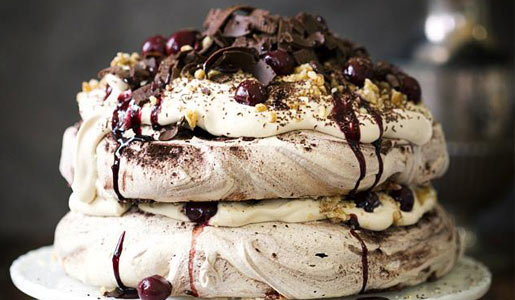 In my dieting days I would do my absolute best to stay away from puddings, deserts and cakes. They were the epitomy of everything that was ‘bad’. They were full of fat, laden with sugar and refined white carbs, not to mention other foods high on the forbidden list such as chocolate, nuts, golden syrup and so on and so forth. So fattening, so unhealthy! One of my golden rules of dieting was: NEVER HAVE SWEETS, OF ANY KIND. Other golden rules I had randomly inherited from the many diets I had attempted (and invariably failed at) were: YOU MUST EAT 5 PORTIONS OF FRUIT AND VEG A DAY and BUTTER IS EVIL.

The irony is that while I sometimes managed to politely but firmly say ‘no’ when offered a slice of cake or faced with the desert menu at a restaurant,  I often ended the day stuffing my face with anything sweet I could get my hands on – usually something from the petrol station or the corner shop – a bar of chocolate, jaffa cake muffins, caramel digestives…hardly slimming…and hardly healthy.

In my life Beyond Chocolate, I don’t have rules, golden or otherwise. And I don’t confuse ‘high in calories’ with ‘unhealthy’ either. I have a slice of cake, a pudding or some sort of ‘sweet’ every day. There is always a cake in the cake tin. Mostly it’s a variation on the current favourite, a stupidly easy yoghurt loaf cake to which I add apples or bananas or raisins or lemon zest or chocolate chunks or whatever I fancy really. It’s got a short list of simple, unmucked about ingredients and it tastes infinitely better than cheap chocolate and processed junk.  I’m also – after years of vowing that M&S did the best ones and why would I bother – making steamed sponge puddings, the best: a cocoa and orange marmalade one which tastes like Terry’s Chocolate Orange, only 1000 times better. Lately, I’ve developed an obsession about baking these amazing chocolate cookies with a peanut butter centre – truly divine. When I have one of those with a cup of tea in the afternoon I feel no compulsion to raid the corner shop for a binge later. I’ve had my chocolate ‘fix’ for the day, I’ve thoroughly enjoyed it, it’s made with quality, tasty and wholesome ingredients and I know there are another 31 waiting for me in the tin. Ready for when I next fancy one.

Looks like I really do get to have my cake and eat it. Just another happy consequence of ditching the diets and being my own guru. Yipee.

Find out more about working with me and bringing Beyond Chocolate into your kitchen and onto your plate with Food & Eating Coaching.

Audrey
https://www.beyondchocolate.co.uk
Audrey Boss is one of the UK’s most innovative and forward thinking Food & Eating Coach. She has played an integral part in developing the No Diet movement across Europe, North America and Australia for over 15 years. She particularly focuses her talents on supporting women to take the stress out of eating and enjoy healthy, satisfying and tasty food. Audrey is an inspiration in the kitchen and is committed to helping women to bring the Beyond Chocolate approach onto their tables and in to their lives. Audrey is the go-to person for anyone wishing to make practical, real and life-lasting changing to their relationship with food, eating and cooking.

I now make a point of having a delicious pudding every single day. Has cut binges down to ZERO.

I agree! I’ve just had a piece of chocolate cake in Starbucks because I wanted to!

I’m going to disagree, up to a point. I’m finding that I do much better with a minimum amount of sugar – eating it distorts my appetite, makes me hungrier an hour or two later, and in the evenings it interferes with my sleep. I’ve noticed that after a couple of days with very little sugar, my appetite actually diminishes and I want to eat less. I’m finding that for me it’s better to focus on eating healthy, tasty food, with no calorie limits, but mostly keep off the sugar and refined carbs, even if I crave them – though I say “mostly”, as I’m not aiming for perfection and when I’m out or with friends, I’ll (very!) happily enjoy a cake or pudding. As ever, moderation in all things!

I couldn’t agree more, eating sugar and carbohydrates makes me feel good for a very short time and I get hungry and dissatisfied very quickly. If i eat protein on The other hand for a couple of meals back to back, i feel more energetic and even more happy generally. I find myself more clear and more positive and i don’t believe it’s because I feel better if I eat the healtier stuff, it’s scientifically proven.

I agree with this article by Audrey. I’ve been working through Part one lessons and am really pleased with progress. My binges and cravings are lessening. I can now keep previously forbidden foods in the cupboard knowing that I can have as much as I want of them any time I want – and I occasionally do. My binges were often junk from the corner shop which I know are full of ghastly ingredients which I would never otherwise thole. So to be able to make lovely home-made bakes with simple ingredients fulfills two things – eating tasty food I love and not giving in to industrialised over-marketed junk. I am a long way from finishing my journey – I described it to a friend recently as ‘re-engineering my relationship with food’ – but thank-you, Beyond Chocolate, I’m glad I found you.
Bye the way, I also read your Geneen Roth’s ‘Breaking Free from compulsive Eating’ and found that very helpful too, particularly having already done some of the BC lessons.