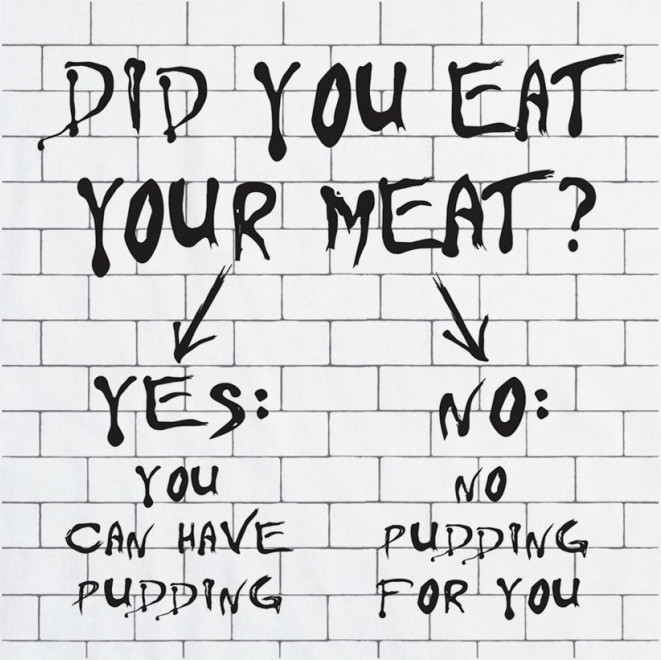 Me and my ‘pudding stomach’!

Did you have a ‘pudding stomach’ when you were a child? I certainly did! After pushing my first course around my plate and trying unsuccessfully to hide as much of it as I could under my knife and fork, I would hear the disapproving parental voice say, ‘If you can’t finish that, you don’t have room for pudding.’

Of course, the sheer illogicality of this struck me forcibly as a child – if I filled up on the meat and veg, I certainly wouldn’t have any room for pudding, so it seemed to me a much better deal to leave some of my first course and definitely have room for the pudding. My response to the disapproving parental voice would usually be, ‘I’ve got room for pudding.’ You see, what adults didn’t understand was that children have a separate pudding stomach, quite divorced from the functional one which deals with the first course. I don’t remember ever being denied pudding for not eating my first course, but I do remember the disapproval of leaving food, which was usually passed to my father to finish up.

So the lessons I learned from this childhood experience were:

1. Puddings were eaten after main courses

2. Puddings were much more fun and desirable than main courses

3. Not finishing up food was a problem (unless there was someone around who would finish up for me!).

Working with the beyond Chocolate approach, one of the very first things which struck me forcibly was the realisation that Enjoy was a principle with equal weight to the other nine. If I enjoyed eating pudding, why not eat it first, when I was really hungry rather than last when my hunger had been dulled or sated by my first course? Or why not just eat pudding and not have a main course, if that was what I really wanted to eat?

So I did. The looks I got in cafes and restaurants were amusing – sometimes open horror, sometimes fascination, mostly disapproval – but I didn’t care, this was MY eating experience, not theirs. I recently met a friend for lunch at Pret and chose one of their gorgeous chewy warm melty chocolate chip cookies and a veggie wrap (I’m not on commission, but if you enjoy those sorts of cookies – they’re among the best I’ve found yet). You can possibly guess which one I was more excited about?! I ate the cookie first and my friend noticed. ‘Don’t you want the wrap?’ she asked. ‘I wanted to eat this first,’ I said and, to her credit, she accepted that.

There were a couple of small children in the cafe and I saw something I’d noticed before but not seen through my Beyond Chocolate eyes until now. Small children play with food. They really enjoy teasing out its textures, testing its limits, squishing it, smushing it, pulling it apart, holding it up to look at the effect they’ve had on it, showing it smeared all over their hands to their adult carers – and only after doing that do they (sometimes!) eat it. This often worries parents or carers who tell them not to waste the food, not to do that, just to eat up, which is rather a shame because those children are learning that food isn’t fun, it isn’t to be enjoyed and played with – it’s a serious business this eating and making a mess is frowned upon.

Although I am not encouraging you to behave like those small children in public, or what the hell, why not? At least take from them the sheer enjoyment of food; really look at your choice, smell it, move it around, take it apart, put it back in a way that’s better for you, really take your time over it rather than just gulping it down while checking the phone for any new messages.

In other words, Enjoy!

Gretel
After half a life-time of yo-yo dieting, Gretel found Beyond Chocolate by chance and says she has never been more grateful. She decided to train as a Facilitator to learn more about herself and to help other women to get off the dieting treadmill. Gretel is a regular contributor to the Beyond Chocolate blog with thought provoking and practical guides to living a life Beyond Chocolate, that is when she’s not busy studying Ancient History and Mythology.